A Look at African American Influence on Food Culture

As I listen to the ‘Black To The Future’ Playlist on Spotify, I reflect on the resilience of African Americans. Where we have been, where we we are now, and where will we go. It only felt right to bring Black History Month to a close with this article. In it, I will be highlighting the African American consumer today and take a look on the influence the Black community has had on American food culture.

Ahead of the food portion, let’s talk about what the African American consumer looks like. According to Nielsen, there are around 48.2 million Black or African American citizens in the US today. The group is also expected to account for 20% of total growth over the next 40 years. The buying power of the community is also nothing to blink at, and brands are starting to realize this.

This media spending is not in vain. According to Mintel, social media drives African American consumers’ brand loyalty and support. Social support is also very important, a head cause being the Black Lives Matter movement. African Americans look to brands past their products, 70% believing it’s VERY important for companies to act morally/ethically according to Mintel.

Hot Sauce In Their Bag

I couldn’t make this article about food and not include that classic Beyoncé quote. And, lucky for us, it is super relevant! In our blog on spicy snacks, Armand talks about how spicy is all the rave. Louisiana Hot Sauce, in fact, is African American’s favorite flavor, according to Datassential (backed up by Beyoncé). Nashville hot, Spicy BBQ Sauce and Buffalo also make the list.

Continuing on the savory note, we dug into thousands of US Menus through Datassential. On those menus, we found that in the highest scoring savory dishes, we see flavors like smoke, rosemary, and garlic lime.

On the sweet side, African Americans like things indulgent and highly visual. Products with these aspects scored high in uniqueness and unbranded purchase intent. This shows opportunity for using natural colors and purees in products to appeal to the Black consumer.

A Look Back to Understand the Now

The African American community has found a way to connect through music, style, language, and of course…food. Soul Food, a term coined during the Black Power Movement to describe black people’s home cooking, is one of the largest ways African Americans influence food culture. In his most recent blog, Kyle touched on Gullah Cuisine, which includes some classics like Hoppin’ John and Collard Greens. Let’s dive into 2 other classics that had roots in the black community:

[Soul Food is a way] to talk about what we shared. And that sharing felt so good to have something in common with all of us”

High on The Hog

Pork quickly became one of the preferred meats by US residents and served for almost every meal. Slaves were given ‘lesser’ cuts of the hog, including the feet, head, and ribs. The upper parts were seen as more esteemed, coining the term ‘high on the hog’, referring to a luxurious lifestyle.

Enslaved peoples were tasked with preparing all the meat for the smokehouse. From this came the use of many different woods and meats for different flavors and the core of today’s bbq: smoke and sauce. The most interesting part to me, though, is that frying and grilling was found in West Africa before the West African slave trade. Giving the notion that one of America’s favorite ways to cook was brought to fruition by the slaves brought to North America.

Who doesn’t love a good sweet potato pie? Sweet potato pie was a combination of Native American and African American influence. Sweet potatoes were brought to settlers by Native Americans. Slaves were then able to look towards the similarity to yams (also popular in soul food) from West Africa. They used these flavor notes to turn the pumpkin pie into something familiar to them.

They Put Their Foot in It

I couldn’t talk about these cuisines without mentioning the cooks who brought these dishes to life. The enslaved cooks were commonly responsible for the image of the plantation owner. They, as the phrase goes, ‘ put their foot in it’…executing dishes that were raved about across the country. Many go unnamed, but one known cook was Hercules, the enslaved chef of George Washington.

Hercules was taught by well-known New York culinary giant Samuel Frances. Hercules was [one of] the nation’s first celebrity chefs, famous for his talents and skills

Hercules set the tone of the presidential kitchen, being its first lead chef. Although many of the enslaved cooks’ stories and names were lost, their contribution along with many other African Americans flourishes in America in more ways than can be fit into one article. Only until recently, has there been in-depth research on the food influence of African and African American slaves. To learn more about the history, I recommend the book The Cooking Gene by black food historian Michael Twitty. Of course, each African American consumer is unique and will have different preferences in food.

There is no denying the influence of African Americans on American Culture. The history around the foodprint alone could have its own month. Be on the lookout for more content like this from our Givaudan team! 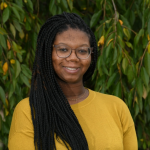